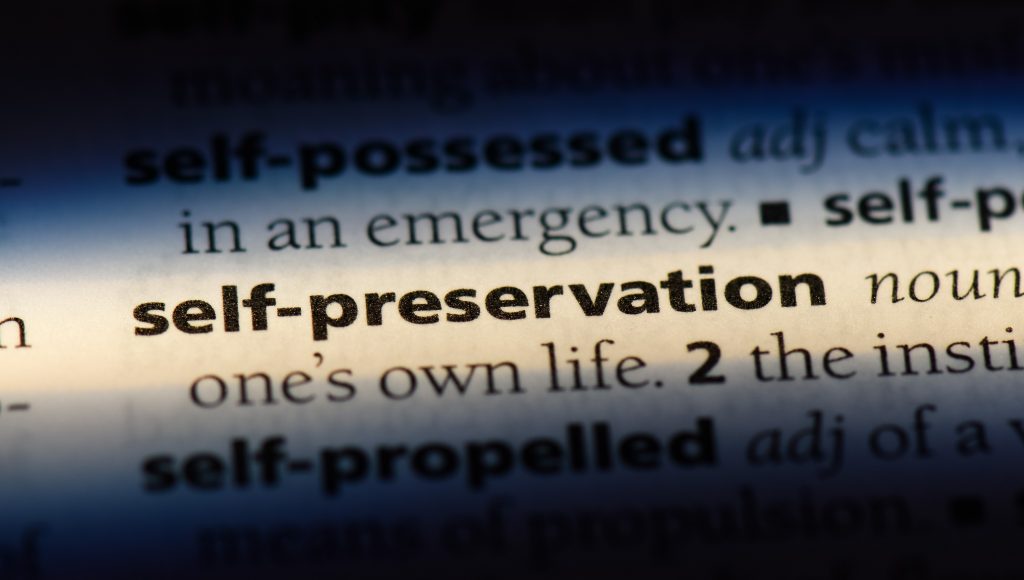 I am being convicted of sin by the Holy Spirit today, and in response I make my confession in the presence of many witnesses: I repent from and renounce the inclination of my flesh toward self-preservation.

What do I mean by self-preservation? I mean the inclination of the flesh to back off a little bit from the edge of controversy or risk or implicit obedience to Christ in order to protect one’s sense of security.

To qualify my meaning, I’m not talking about positive kinds of self-preservation that are helpful and necessary to preserve human life. There’s a kind of self-preservation that is good—a basic instinct placed inside us by our Creator that helps us protect ourselves in the face of potential harm or death. For example, if your car should suddenly spin out of control, adrenalin rushes and instincts kick in that help you do everything you can to avert an accident and preserve life. That instinct to preserve life is a gift from God and we’re grateful for it. But that same instinct can spill over into other areas of the soul and become a trap that keeps us from implicit obedience to Christ’s will for our lives.

What might be an example of this negative kind of self-preservation? For starters, look at Peter. At Jesus’ trial, Peter denied Him three times because of his instinct for self-preservation. Had he confessed Jesus in that moment, he would probably have been tried and crucified with Jesus. The instinct to save his life took over, and Peter denied any association with Jesus.

Secondly, look at the Jewish leaders. As they plotted to crucify Jesus, they said, “If we let Him alone like this, everyone will believe in Him, and the Romans will come and take away both our place and nation” (John 11:48). In their reach for self-preservation, they ended up crucifying their Messiah. When they tried to save their lives they lost them (Matt 16:25).

For a third example of self-preservation, look at King Jeroboam. When the nation of Israel was divided into two nations, Jeroboam became king of the northern kingdom of Israel, and Rehoboam became king of the southern kingdom of Judah in Jerusalem. Jeroboam was afraid that his people would travel to Jerusalem to worship God at the temple, their hearts would turn toward King Rehoboam in Jerusalem, and they would turn against Jeroboam and kill him (1 Kings 12:27). In an attempt to preserve his life, Jeroboam set up idolatrous altars in the cities of Dan and Bethel, and he told the people to worship God there rather than in Jerusalem. Because Jeroboam opened wide the doors to idolatry in Israel, he came under fearful judgment from God. In his desire to save his life, he actually lost it.

Do we have an example of someone who refused to bow to the temptation of self-preservation and was honored by God for it? Yes, there are several in Scripture. For starters, look at Peter again. Yes, he tried to preserve his life at Jesus’ trial, but after the Holy Spirit was poured out at Pentecost, Peter became a different man. One of the things the Holy Spirit loves to do is give us the power to hate our lives. After Peter was filled with the Holy Spirit, he demonstrated the very opposite of self-preservation. He was empowered by the Spirit to put everything on the line for the sake of loyalty to Christ.

The Peter story I have in mind is in Acts 4. Peter and John healed a beggar who had been lame from birth, and the beggar immediately joined them in entering the temple, jumping and leaping and praising God (Acts 3:8). Peter told everyone that this miracle was proof Jesus is alive. The fact that Peter turned the healing into an opportunity to preach the resurrection infuriated the Jewish leaders, and they arrested the apostles.

The next day, Peter and John were brought to trial for preaching Christ’s resurrection. Seated in the court room were all the leaders who had presided over Jesus’ trial just a few weeks earlier. Their presence conveyed a silent but clear message: “We had the power to get your Leader crucified, and we still have just as much political clout. We can get you crucified, too!”

With the apostles and the healed man before them, the council asked Peter and John, “By what power or by what name have you done this?” (Acts 4:7). Weeks earlier, Peter probably would have caved to self-preservation. But now, filled with the Holy Spirit, he said to them,
Rulers of the people and elders of Israel: If we this day are judged for a good deed done to a helpless man, by what means he has been made well, let it be known to you all, and to all the people of Israel, that by the name of Jesus Christ of Nazareth, whom you crucified, whom God raised from the dead, by Him this man stands here before you whole. This is the “stone which was rejected by you builders, which has become the chief cornerstone.” Nor is there salvation in any other, for there is no other name under heaven given among men by which we must be saved (Acts 4:8–12).

Instead of caving to self-preservation, Peter chose to lose his life. He could not have made a statement that was more inflammatory or politically incorrect.

Consider these elements in Peter’s statement:
• When the rulers were demanding that the apostles not spread their message any further, Peter said he wanted his message to be made known “to all the people of Israel.”
• He bluntly charged them with crucifying the Christ, Jesus of Nazareth.
• He testified that God raised Jesus from the dead.
• He said they had fulfilled the prophecy of Isaiah and had rejected their chief cornerstone.
• He affirmed that salvation is to be found in no other name. He made the most inflammatory affirmation possible: “There is no other name under heaven given among men by which we must be saved.”

This was political incorrectness on steroids. Zero self-preservation.

We live at a time when it’s tempting to back away from speaking God’s revealed scriptural truth because this generation despises it and creates its own truth. Self-preservation will intimidate us into silence at a time when righteousness would speak up (Ps 58:1). Silence is not always right. When we’re in love with the Lamb, we love not our lives, even unto death (Rev 12:11).

In what ways might you be tempted to self-preserve?

I’ll start the conversation by confessing what the Holy Spirit is convicting me about. In the course of my writing and traveling ministry, I preach in a lot of different churches. As a guest preacher, I always seek to follow the leading of the Holy Spirit and say only those things He leads me to say. But I have another value that I also juggle: Honor for my host pastor. Because I value a culture of honor, I always seek to honor every host in ministry contexts. Occasionally, a host pastor might request that I speak on a certain topic or limit my speaking time to so many minutes.

It can get a bit tricky when my host expresses certain requests or expectations. Why? Because there’s something in my flesh that wants to preserve my traveling ministry. Itinerant ministries are sustained by repeat invitations, and the easiest way for an itinerant ministry to commit ministry suicide is to disregard the expectations of host pastors. Your hosts simply won’t invite you back.

The Holy Spirit has been testing my motives with this question: When my host expresses certain expectations to me, do I fulfill those expectations because I value a culture of honor or because I’m trying to preserve my profession? When I’m motivated by self-preservation, it’s tempting to back away from anything the Lord might lead that my host might perceive as controversial or risky or taking too long. Do I serve the Lord, or the preserving of my ministry career?

Confession. Under the banner of honor, I’m sometimes tempted to self-preserve. Jesus said that no one can serve two masters (Matt 6:24), so it’s impossible for me as a guest preacher to serve both my host ministry and the Lord. Self-preservation wants me to serve all the ministry expectations so that I’ll be invited back again. This is what the Holy Spirit is highlighting in my heart today. In response, I’m telling the Lord that I repent of and renounce self-preservation. I don’t serve a clock, and I don’t serve an honorarium, I serve Him. I resolve to renounce self-preservation whenever I detect it. Once again, I willingly lose my life (John 12:25).

How about you? In what ways might you be tempted with self-preservation? This temptation is sometimes attached to areas of influence, income stream, favor, reach, friendships, following, comforts, group acceptance, and reputation.

In a cancel culture, we face the fear of being misunderstood, marginalized, banned, censored, labeled a hater, or having our social media platforms shut down. In such a culture, the temptation to self-preserve can be strong.

I invite you to pray with me: Lord Jesus, I repent from and renounce self-preservation. Every time You reveal its influences in my soul, I will renounce it again. I’m not trying to save or preserve my life, but rather I seek to lose my life in obedience to Your will and call. You are my strong tower, and I trust in You to preserve and keep everything I’ve committed to You until the Day of Jesus Christ. Amen.