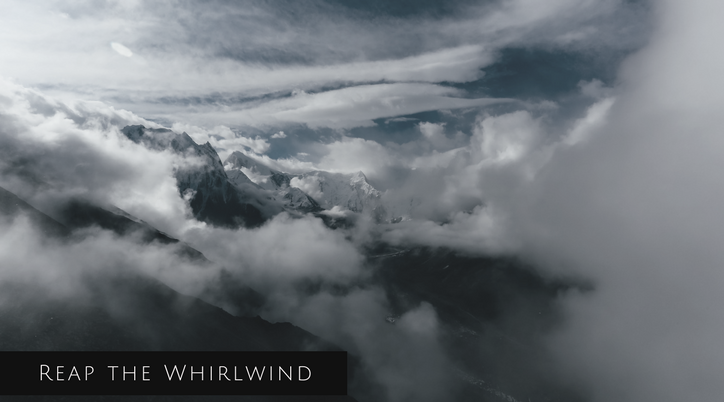 Let me share with you the Scripture that is at the front of my
heart as I’m stepping into 2018. It’s Hosea 8:7, “They sow the wind,
and reap the whirlwind.”

If the negative is true, is the positive also true? That is, if we
sow to empty winds and reap a negative whirlwind, is it also true that
if we’ll sow to positive winds that we’ll reap a positive whirlwind from
God? I think the answer could be yes. I believe the positive principle
in the verse is this: If we will sow to the winds of the Spirit, we will
reap a whirlwind of divine visitation from the Holy Spirit.
This principle is supported by Paul, who wrote, “He who sows
to the Spirit will of the Spirit reap everlasting life” (Gal 6:8). There are
ways to sow to the Spirit that produce blessing in our lives.

For me, the lives of three men in the Bible represent the
principle of Hosea 8:7. Job, Ezekiel, and John sowed to the winds of
the Spirit and eventually reaped the whirlwind of God’s visitation.

Job. How did Job sow to the winds of the Spirit in his trial? By
enduring in faith. He continued expectantly in prayer, in this midst of
his great suffering, keeping his eyes on the Lord. In chapter 38, he
told how God visited him in the whirlwind. When God came to Job in
the whirlwind, everything changed. That whirlwind signaled that God
was now intervening on Job’s behalf and fighting for him. Job actually
saw God with his eyes. What an awesome whirlwind to reap!

Ezekiel. Ezekiel was a priest, and at age 30 he should have
been officially inducted and commissioned as a fully functional priest
in the temple. Instead, the temple had been burned by the
Babylonians and Ezekiel was an exiled captive in a foreign land.
Turning 30 was a reminder of the divine calling he would never fulfill.
His 30th birthday could have been cause for him to be despondent
and depressed. Instead, Ezekiel got in the Spirit. He gave himself to
prayer and to the Holy Spirit. And even though he was a captive, the
whirlwind of God invaded his life and changed everything. “Then I
looked, and behold, a whirlwind was coming out of the north” (Ezek
1:4).

That whirlwind was Jesus Himself coming to him, riding in a
chariot consisting of four cherubim. The cherubim were Jesus’
chariot, Jesus’ car. This invasion of God, via the whirlwind, marked
the launch of a powerful prophetic ministry through Ezekiel. Seeing
God changed Ezekiel forever.

John. Like Ezekiel, John was also a captive. He was a prisoner
of the Roman penal system on a prison island called Patmos. And he
was in his 90s. He had reason, in the natural, to bemoan his living
conditions. Especially on the Lord’s Day, which was a celebration of
Jesus’ resurrection. Jesus was resurrected and alive but none of that
resurrection life was touching John. All John felt in his body was
death, loneliness, and deprivation. But instead of getting depressed,
he got in the Spirit. Here’s how he described the launch of his
visitation: “I was in the Spirit on the Lord’s Day, and I heard behind
me a loud voice, as of a trumpet” Rev 1:10. Jesus Himself had come
to him and was talking to him. John sowed to the winds of the Spirit
by getting in the Spirit on the Lord’s Day, and he reaped the whirlwind
of a history-changing encounter with the resurrected Christ.
Therefore, take this cue from Hosea 8:7: Sow to the Spirit. Sow
to the winds of the Spirit.  And watch for the whirlwind of God.

This is the scriptural thought at the front of my heart as I step into 2018.

May you have grace from above to sow to the winds of the Spirit in 2018,
and may you reap the whirlwind of God.