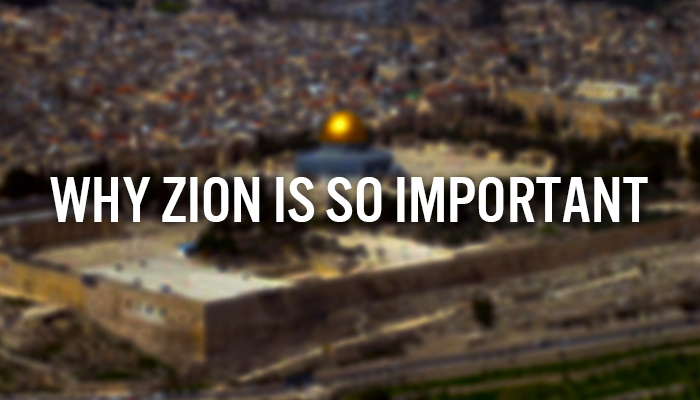 Beautiful in elevation, the joy of the whole earth, is Mount Zion on the sides of the north, the city of the great King (Psalm 48:2).

When David set his sights on Jerusalem, he was tapping into a spiritual stream of prophetic significance that was centuries old. Jerusalem had been on God’s mind for a long time. It’s a city whose profound spiritual history reached back a thousand years before David to the time of Abraham.

The first mention of Jerusalem in the Bible occurs in Genesis 14, at a time when Lot had been carried captive by invading forces. In a stunning military victory, Abraham delivered Lot from his captors and brought him safely home. Upon his return, Melchizedek went out to meet Abraham and bless him. Melchizedek was the king of Jerusalem (Salem) and also the priest of God Most High (see Genesis 14:14-24). Since Zion was Jerusalem’s safest neighborhood and thus its most ancient neighborhood—the “old city” if you will—it is reasonable to conclude that Melchizedek’s throne was in Zion proper (even though it wasn’t called Zion at the time). We could say, therefore, that Melchizedek came out of Zion in order to bless Abraham.

There was a second time when Abraham quietly brushed with Zion—when Abraham led his son, Isaac, to Mount Moriah, bound him, and placed him on a makeshift altar (see Genesis 22). Abraham intended to obey God’s voice and sacrifice his only son. A voice from heaven stopped him, and instead God provided a ram for the burnt offering. This all happened on Moriah.

Moriah is a hill within the city limits of contemporary Jerusalem. Moriah was the place where Solomon built his temple, and today it is the site of the Mosque of Omar (the Dome of the Rock). So when Abraham was on Moriah, he would have been within eyeshot of Zion and Melchizedek’s governmental seat. There is no biblical hint that he popped in on Melchizedek at that time, but the proximity would have made it very easy to do.

Melchizedek was the first priest of God to appear in Scripture, and it was no coincidence that his throne was in Zion (called Salem at the time). Jesus Christ was later declared to be a Priest in the order of Melchizedek (Psalm 110:4). As such, Jesus is the rightful heir to the throne of Zion.

The Bible draws a great line of prophetic purpose between Melchizedek and Jesus Christ (see Hebrews 5-7). David stepped into the matrix of that divine purpose when he chose, under Holy Spirit direction, to conquer Zion.

And like Melchizedek before him, David was called of God to function in both a kingly and priestly capacity. This is why we see David putting on a linen ephod—which was a garment for priests to wear—at the procession of the ark to Zion (1 Chronicles 15:27). As a king, David was claiming also to be a priest. We know, however, that David was not pretending to be a Levitical priest since he was not of the tribe of Levi. Of what priesthood was he, then? There is only one remaining possibility. Clearly, David saw himself serving the Lord as a priest in the order of Melchizedek—a priesthood that is both priestly and kingly. David had no right to serve as a priest in the Aaronic order, but as a priest in the order of Melchizedek he was given divine permission to place the ark in open view, sit before it, and minister to the Lord.

While serving in this priestly capacity, David was shown that Messiah would serve before God in the same priesthood. This is why David wrote, “The LORD has sworn and will not relent, ‘You are a priest forever according to the order of Melchizedek’” (Psalm 110:4). David’s zeal for Zion was rooted in his understanding that one day Messiah would rule in Jerusalem as a Priest/King, just like Melchizedek did centuries before.

Jerusalem is a city like none other! It holds the distinction of being the only place on earth God chose as His eternal home (see Psalm 132:13-14). This is why history revolves around this city and God’s agenda for it. There are said to be 685 cities in the earth with a population larger than Jerusalem, and yet Jerusalem makes international headlines consistently more than most of them. What is the deal with Jerusalem, anyway? Why is it the most important city on earth? What makes it so different from other cities?

The answer is that God’s eyes and interests are riveted upon Jerusalem and, consequently, so are Satan’s. No location on earth matches Jerusalem for intensity of heavenly attention and spiritual warfare.

The name Zion was used initially in Scripture for the small citadel inside Jerusalem where David placed his throne. Over time, however, the Holy Spirit began to broaden the concept of Zion in Scripture until it sometimes referred to all of Jerusalem (e.g., Psalm 76:2), or even the entire nation of Israel (e.g., Isaiah 3:16). When Zion is mentioned in the Bible, therefore, the precise meaning of the term can vary a bit depending on the context.

Jerusalem’s salvation is not even remotely seen right now. Men look at her today and see reproach, strife, stubbornness, and religious wars. What will it take to transform Jerusalem from its current condition to a city that shines brightly before the whole earth? Only one thing can effect that kind of transformation—the physical return of Jesus Christ. Only when Jesus establishes His throne in Zion will Jerusalem become a praise in all the earth (see Isaiah 62:7).

God chose the most impenetrable fortress in the entire land of Canaan as the geographical seat of Christ’s throne and authority. Zion’s reputation as unconquerable reflected the enduring nature of Christ’s Kingdom. “His kingdom is the one which shall not be destroyed, and His dominion shall endure to the end” (Daniel 6:26).

David established his throne in Zion as a prophetic declaration that eventually his Son, the Messiah, would reign in that exact place. In David’s time, Zion’s primary identity was the governmental seat for David’s throne. Using an American term, Zion was David’s “White House.”

Once he established his political capital in Zion, David then used his authority to establish Zion as a seat for 24/7 worship to the Lord (1 Chronicles 25). David understood the pattern of worship in the heavenlies (Psalm 119:96). He observed that wherever God’s throne is established there is incessant worship arising before Him. To fulfill that divine pattern, David inaugurated 24/7 worship and prayer in the stronghold of Zion. That 24/7 house of prayer represented the worship and praise that will arise incessantly to Jesus when He returns to earth and places His throne in Zion. Davidic-style worship will continue in Zion forever.

•The seat of governmental authority, and

•The seat of incessant worship.

When David conquered Zion, it was so that he might establish both realities in Zion in their proper order.

We are watching an unprecedented phenomenon taking place in the earth right now. 24/7 houses of prayer are arising throughout the earth. As incessant worship is established before the Lord of God, it provides an atmosphere where the governmental authority of Christ in the earth can be exercised. And the inverse is also true: Whenever the kingdom of God is established with authority in a region, it makes a way for 24/7 houses of prayer to be raised up in that region.

David was promised by Samuel that he would be king of Israel, but it did not happen all at once. First he went through approximately ten years of refining in the wilderness. The latter part of that season was spent in exile in the land of the Philistines. Once his preparation was complete, he was given the kingdom of Israel in two stages.

Seven years later Ishbosheth died. Then the eleven tribes of Israel gathered together and asked David to reign over all twelve tribes of Israel. For the next thirty-three years, David was king over the entire nation.

Once David was crowned king of the twelve tribes, Jerusalem came under his jurisdiction. David had been waiting for this moment and immediately sprang to action regarding Zion.

As you read the biblical passages below, notice how one event followed the other. First came David’s coronation as king.

Then all the tribes of Israel came to David at Hebron and spoke, saying, “Indeed we are your bone and your flesh. Also, in time past, when Saul was king over us, you were the one who led Israel out and brought them in; and the LORD said to you, ‘You shall shepherd My people Israel, and be ruler over Israel.’” Therefore all the elders of Israel came to the king at Hebron, and King David made a covenant with them at Hebron before the LORD. And they anointed David king over Israel. David was thirty years old when he began to reign, and he reigned forty years. In Hebron he reigned over Judah seven years and six months, and in Jerusalem he reigned thirty-three years over all Israel and Judah (2 Samuel 5:1-5).

I want you to notice, now, the next verse in the Bible. What was David’s very first act as king of Israel?  Look at it.

And the king and his men went to Jerusalem against the Jebusites, the inhabitants of the land, who spoke to David, saying, “You shall not come in here; but the blind and the lame will repel you,” thinking, “David cannot come in here.” Nevertheless David took the stronghold of Zion (that is, the City of David) (2 Samuel 5:6-7).

First came the coronation over the twelve tribes; then came the conquest of Zion.

David’s very first order of business as king of the entire land was to target the stronghold of Zion. Clearly, Zion was in his crosshairs all along, but he could not engage the stronghold as long as it lay outside his political jurisdiction. Once he had the authority to do something about it, he did not pause for the slightest moment but headed straight for Zion.